The chef who has most inspired my cooking exploits is Fergus Henderson of St John Restaurant in London.  I stumbled upon his restaurant by accident while doing some internet research for a trip to London many years ago.  His philosophy of nose to tail eating reverberated with me - from pig's ear terrine, crispy pig's tails and even deep fried squirrel (this blog only provides you with a glimpse of the kind of crazy shit that my best mate Brandon and I eat while on holidays.  We might not necessarily enjoy it, but we'll try it at least once!)

I'm pleased to say that we subsequently sampled the delights of St John (including said pig's ear terrine and crispy fried pig's tails) during one very cold London winter, and were very happy indeed!  We even finished off our dinner with these fresh baked mini madeleines which had an exquisite lemon-honey flavour.  Needless to say, I have been evangelical about St John ever since - well before they received a Michelin star.

Anyway, back to the story: doing my internet research, I found their website, was entranced by what I saw, and promptly purchased both cookbooks: Nose to Tail Eating, and Beyond Nose to Tail: A kind of British Cooking: Part II.  Whoever thought that British cooking comprised solely of boiled meats and vegetables, will have their misconceptions brutally shattered by these inspiring books.

The section on rendering in Book II was a revelation to me!  I now happily collect fat run-off from all my roasting for serious slow-cooking and storing meats.

Several years on, and I've only tried a handful of recipes, but one I keep coming back to is pork scratchings, on page 8 of Book II, although I've added a couple of extra bits to it which work for me.

This is a long and involved process, but one that is certainly worth the effort.

Stage 1: You dry salt the pigskin for 5 days, to draw out the smelly oils and excess moisture, then soak it overnight in cold water.

Stage 2: Drain the water, pat the skin dry with a clean tea towel, and lay it out in an oven tray, smear the top with fat (the recipe calls for duck fat, but I'm just as happy using pig fat - it doesn't make any difference).  Cover with foil and stick it in a medium oven (180 degrees celsius) for 2.5 hours.

At the end of this process, your skin will be soft and yielding, but reduced in size and considerably thinner, with much of the moisture and fat leeched out by the slow-cooking.

I usually give it about 20 minutes to cool down and for the fat to start to congeal, then I store it.  You could place it in a container, but I find that laying it out on a sheet of gladwrap works just as well.  Just make sure that the bottom of the skin is slathered in congealing fat first before you lay it down, and then smear a good protective layer of fat on top, before folding over the gladwrap to form an airtight (and fat-tight) seal on all sides.  Then chuck it in the fridge.

Stage 3: When it's time to succumb to the siren call of the crackling, pull it out of the fridge and lay the skin on an oven rack.  If there's still a thick layer of fat on the underside of the skin, scrape it off with a knife, but don't try to cut it too fine, otherwise you're going to start taking off skin as well (skin is essential to the crackling - the skin is the crackling), 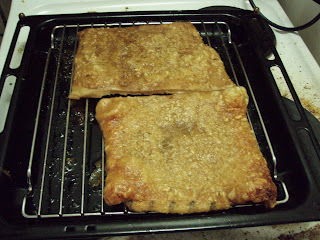 Crank up the heat to 180 degrees celsiius, and leave it in there until it puffs up into golden joy (as described in the book).  If there are pools of oil on the surface of the skin, use a pair of tongs to pull up one edge so that the oil slides off - the idea is to keep the top of the skin oil free, otherwise it won't puff up.

Ahhh joy (I'm crunching down on a healthy sheet of crackling as I type this).

Sourcing the ingredients: I get my skin from my favourite butcher, Aggie's Meats on Preston Street in Como.  You'll need to order it in, but the helpful staff are more than happy to oblige.  Of course, given that the pig skin will only cost a couple of dollars, do the right thing and buy a porterhouse steak or a duck, or even a rabbit, while you're at it.  For my current batch, I got a whole piece of skin roughly the surface area of a coffee table.  Of course, I've had to cut it into pieces which will lie flat on an oven tray .. I've been doing the Stage 2 cooking in my crappy little oven for the last 4 days, and still have 4 more sheets left to go!  Some people like to score the skin.  I prefer to keep it intact, because it allows for much more even cooking, and retains the integrity of the skin during Stage 2 cooking and storage.  Believe me, once your puffy golden sheet of joy is done, it's quite easy to break it up - lay it on a chopping board, lay a thick bladed knife (eg meat cleaver) or cake server flat on the skin, and just apply gentle pressure until it breaks up into bite size chunks.

As for the fat, if you can't find a tub of duck fat, just buy the pigskin with the fat left on.  Cut that out, chuck it into an oven tray and crank up the heat to around 150 degrees celsius.  After a while, all the oily goodness will ooze out, and you can pour it into an old jam jar for storage.

There you go - a (relatively) healthy yet decadent snack!  There's not much fat left, because it's mostly been scraped or melted off at the various stages of preparation.  My personal trainer Tony reckons it's the perfect post-workout high protein food.

There's another recipe for back fat and walnuts, which involves salting for a month, but you'll need to buy the book for that.  Go to the St John website and buy one of the cookbooks - in fact, buy both!  You won't regret it.
Posted by The Frenchman at 10:08 PM