Every once in a while I have the privilege; nay the pleasure, of trying out something new and special before others get the chance. 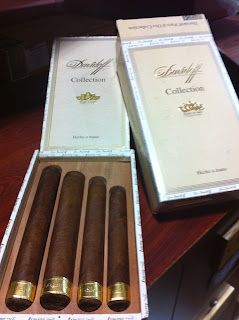 This time, one of my besties, Simon Devlin, Cigar Master (i hope there's no official society of cigar masters who get upset by my flagrant use of the honorific, but hey - this is a guy who's sat down with cigar legend Min Ron Nee in the latter's own home, lit up stogies from Min's humidor, and drank from his wine collection!) and purveyor of fine cigars and gifts for the man who has everything, sat me down to taste two cigars from Davidoff's new range - Puro D'oro.

According to Christian Von Thron, Davidoff's internationally-roving cigar ambassador, Davidoff has spent quite a bit of time developing a stronger tobacco blend, so as to create something in the style of your top shelf Cubano, albeit out of Dominican leaves. The sincerest form of flattery indeed. Going back to its roots, in a way - in the good old days, Davidoff cigars were Cuban made, but in the old days, quality control in the Cuban factory was non-existent. Donde esta qualitas? No se señor! This culminated in Zino Davidoff's famous burning of hundreds of thousands of Cuban cigars in 1989 which he deemed of such poor quality that they were unfit for sale. Which is why, to this day, Davidoff doesn't sell cigars made in Cuba. On the other hand, some would say that Davidoff should take a large part of the credit for developing the credibility of Dominican cigars as a quality smoke (the rest of the credit of course goes to JFK for imposing the Cuban embargo, but not before his Chief of Staff bought hundreds of boxes of Cuban cigars just before the embargo took effect, or so the legend goes).

I started with the Magnificos (a nice fat 52 ring gauge robusto), and Simon took the Notables (a corona gorda with a 46 ring gauge).

Since we were intent on a serious tasting, we started with a pre-lighting inspection.

Finished off with a pigtail cap, the Puro D'oro is dark - much darker than your standard Davidoff cigar (excepting the Maduro range, of course), with the wrapper leaf showing a distinctive waxy, oily, marbled sheen that one would only expect from leaves sourced from La Vuelta Abajo.

The pre-lit cigars displayed a mild, light aromatic fragrance, and when cut, offered a good draw - not loose like the proverbial wizard's sleeve, but not so tight that it feels like you're trying to drink porridge through a straw.

The truly intriguing discovery we made was the dry draw flavour (ie from trying to smoke a pre-lit cigar). A spicy, numbing tingle on the tip of the tongue, accompanied by stone fruit/apricot flavour at the back of the throat; with the lingering but subtle taste of tea leaf.

Okay - we can only wait so long to light up these bad boys!

On lighting, we noted that the smoke aroma is a richer, dark woody fragrance.  Now for a puff ...

Hmmm ... a slight ammonic tinge on my Magnificos, but Simon's Notables delivered a much stronger mouthful of ammonia.  We speculated that this was due to the narrower ring gauge of the Notables, which served to concentrate the flavours, both good and bad.  These cigars would probably benefit from 2-3 months in the humidor for the ammonia to dissipate.

Looking on the bright side, once you get past the ammonia, the flavour is a marvel.  Distinctly more robust than your usual Davidoff, but with subtle complexity, especially in the back palate - espresso, dark chocolate abounds, with thick, creamy smoke enveloping your palate.

The Magnificos has the stronger flavour, exhibiting the bitterness of strong turkish coffee, overlaid by leather and burnt caramel.

The Notables, on the other hand, displays more sweetness - caramel with plummy hints at the edges.

Simon was confident that these cigars will mature well over time.

Stage 3: The final half


Most of the ammonia has now burnt off, leaving us to enjoy the unadulterated flavours.

The ash is quite white, which is characteristic of Dominican leaves.  Surprisingly, it was also very crumbly, despite the fact that these cigars were made from long filler (reminiscent of Cubans).  It certainly didn't stay on the cigars for as long as your normal Davidoffs.  I remember smoking a Zino Platinum Crown Barrel once - the ash lasted nearl halfway into the cigar before falling off of its own accord (and I wasn't nursing it either!).

I'm starting to feel lightheaded, which is very unusual for my first cigar of the day.  These little suckers do pack a punch.

Towards the final third of the cigars, the flavours start to intensify.  I'm now getting more burnt toffee flavours, with nicely complements the Henessy VSOP that Simon decides it's time to drink.  As an aside, he serves them in Riedel cognac glasses (which his shop stocks, of course), and I have to admit that it truly enhances the enjoyment of the drink - you can breathe deep the aroma without feeling like you've just set fire to your nose hairs (which is what will happen if you try it from a normal cognac balloon).

The cognac brings out more pronounced caramel flavours from the cigar smoke, reminding me of why a glass of cognac is such a popular accompaniment to a cigar.


These Davidoff Puro D'oros are a truly pleasurable smoke!

However, I have to say that the Notables was far more enjoyable for me.  It's probably because I prefer a milder, yet complex smoke.  For those who like a big flavoured, robust cigar, the Magnificos will not disappoint.

When they finally become available in-store in Australia, I have no doubt that they will be popular, particularly among the more patient connoisseurs who are prepared to wait at least a couple of months for the cigars to develop in the humidor.  The only question is the price point.  I fervently hope that it's going to be a reasonable one, because I'm certainly going to be smoking more of these little fellas!
Posted by The Frenchman at 9:27 AM