A healthier alternative to bacon - update

Voila, here it is: my new ersatz nitrosamine-free bacon breakfast, made from pan frying slices of thin-sliced pork I bought from the Korean deli in Vic Park, which were actually prepared for use in Korean barbecue cuisine.

It's served up with two kinds of mini tomatoes and eggs cooked two ways - indolently scrambled in butter and slightly shy sunny side up - both liberally laced with Akabanga to help me wake up; plus a sprinkling of ikan bilis (air-fried little anchovies pan roasted with peanuts, which I purchased from an Indonesian take-away place in the same shopping centre where the Korean deli is located, Centro Victoria Park).

You can make it look and smell even nicer by adding a sprinkling of dill, fresh shredded basil or some other herb.  But I was too sleepy and too hungry to bother.

As you can see, it looks like bacon (albeit in halfling-sized slices), smells like bacon and tastes like bacon.  Needs salt, though, obviously because it hasn't been cured, and hence salted.  But with a light sprinkling of freshly ground rock salt, it is absolutely beautiful.  And if not guilt free, then at least cancer free ...
Posted by The Frenchman at 10:07 AM No comments: 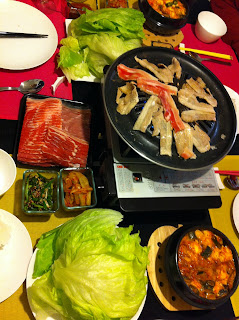 One of my oldest good mates Eujio had the boys over for a home cooked dinner a few nights ago.

Eujio (or Euj) has always been an excellent cook, specialising in Asian dishes.  But since he's about to marry a Korean girl, he has been gradually transformed by his in-laws- and wife-to-be into a good Korean boy (or at least as close as they can get him there).  This includes a new haircut, slightly preppy clothing (compared to his previous edgy style), the ability to spit out Korean words for random things, an appreciation of Far East Movement and a jumbled political view (not Korean-related, but simply his right versus her left - must make for very interesting dinner conversation).  It's certainly clear who wears the pants here.

There is at least one upside to Eujio's reverse taming of the shrew transformation - he's now learnt to do a good Korean barbecue.  Now you might ask, what skill do you really need to cook Korean barbecue, apart from going out and buying the table-top gas-fired barbecue hot-plate cooker?

My answer is: Lots.  Proper Korean barbecue is not merely about slapping slivers of meat on the hot plate.  It's also about the side dishes, as you can see from the photo.  The spicy hot soup with prawns, mushrooms, veges and tofu (not sure what it's called, but it's deliciously rich), the chopped spring onions in some kind of soy and sesame oil sauce with sesame seeds, the moist, slightly sticky rice (hey it's Korean style), the lettuce, the fermented red bean paste (delicious) and of course, the kim chee.

This kim chee was not just any kim chee.  This was homemade by Eujio's Korean mother-in-law to be, to an ancient family recipe handed down through the generations; Euj receives a monthly stipend in a big tub (probably an advance on the dowry).  Man this is some tasty kim chee (speak it like Pitt from Pulp Fiction while he was eating the Big Kahuna burger, and you'll feel what I'm sayin'), sporting an unexpectedly subtle aroma and flavour.

Why the lettuce leaves?  Well, apparently Koreans traditionally eat their barbecue in a manner akin to sang choy bau.  Nestle a lettuce leaf in the palm of your hand and spread some red bean paste on it.  Then add rice, spring onion condiment and even kim chee, before laying one or two slivers of barbecued meat over the top.  Wrap, put in mouth, bite and savour the flavour!

For those of you who like to cook stuff in fat, Korean barbecue is great fun.  The fat run-off from the meat pools in the drain around the outer perimeter of the barbecue plate, and you can confit pretty much everything in it, from mushrooms to meat.

What a fantastic meal, all made from scratch by Euj (or so he claims), except for the kim chee, of course - he's not Korean enough ... yet.

In addition to a great evening of delicious food and hanging out with old mates, talking crap and sparking intense yet meaningless debates by deliberately pushing each other's buttons on politics, religion (such as climate change) and sport, I actually had an epiphany: the thinly sliced pork belly would make an absolutely delicious and healthy substitute for bacon!  It's essentially the same thing, only fresher and cut into smaller slices.

And healthier too (you probably don't hear many people claiming that bacon is healthy, but give me natural animal fat anytime over processed saturated fats!), because it hasn't been thoroughly soaked in sodium nitrate and sodium nitrite like traditional bacon.  Yes, there is a good reason for the use of nitrates and nitrites in cured meats like bacon - to kill botulism spores before they kill you dead (albeit without wrinkles).  And of course, it also preserves the meat which allows it to sit safely on the supermarket shelf for months, and then allows you to keep it in your fridge for a week or so while you gradually eat your way through the pack of bacon.  The problem however arises from the risk that these compounds will break down into nitrosamine (which is scientifically proven to be a human carcinogen that increases the risk of colorectal cancer).  Alright, enough preaching. 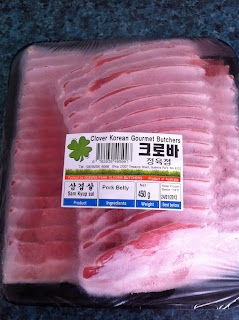 I have been searching for a viable alternative for a long time, and I've finally found it.  It smells like bacon and tastes like bacon, and I don't need to roll the nitrosamine dice.

As of today, I've bought myself a pack of pork belly sliced up Korean barbecue style, separated them into individual serves in ziploc bags, and stuck them all in the freezer, ready to whip out for brekkie or anytime I need a bacon fix!

If you too are interested in a healthier variety of bacon, you can find a Korean deli in the Centro Victoria Park Shopping Centre which sits in between Albany Highway and Shepperton Road in Vic Park, just across the road (Duncan Street) from the Victoria Park Australia Post Office.  It's not the cheapest meat at around $22 a kilo, but it's perfectly pre-cut into mini slices of fresh, non-nitrate/nitrite treated bacon!

Try it out yourself and tell me what you think by posting your responses here!
Posted by The Frenchman at 3:41 PM No comments:

Last night, I had dinner with good friends Wayne and Amanda, who had been slow roasting half a baby goat and a whole lamb leg since that morning.  Two of my favourite meats ...

So what better accompaniment for roast lamb and baby goat than good quality pinot noir made by our cuzzy bros from across the dutch (or "ditch" Australian speak).  I had recently discovered a couple of bottles of Felton Road (2006 and 2007 vintages) which I had totally forgotten about (which was why they hadn't been drunk!), and knowing that Amanda loves pinot (okay so she had to tell me), I decided to bring them over.

So you think it couldn't get any better for us pinot-philes?  Well, the other dinner guests Wayne (not to be confused with Wayne the host) and Wendy also brought a Felton Road, this one being from the 2009 vintage!

Such was the anticipation for the Felton Road to pass our lips that we all but ignored Wayne's bottle of 1998 Cape Mentelle Cabernet Sauvignon (I think it was ... I didn't actually pay much attention, although in my defence I dutifully downed 2 small glasses of it, and it was pretty good).

When we drank the 2006 Felton Road Pinot Noir, both Wayne (the guest) and I almost simultaneously exclaimed at what a refined, well made wine it was.  It had that trademark pinot aroma that made you feel like you were sitting in a soft, warm comfy couch, with subtle plummy and dark cherry fruit flavours and a silky soft texture that slipped down your throat far too easily, leaving us reaching for the bottle to pour again.

But it was the 2007 Felton Road Pinot Noir that stood out, making all of us go wow!  Amanda in particular had her first taste and immediately exclaimed that it was clearly better than the 2006 (which was damn good on its own, I might add).  And she was right.  Much more lively fruit on the attack with an almost effervescent mouthfeel.  If the 2006 was smooth and silky, the 2007 was like water to a parched throat in a desert.  Unbelievable.

Sadly, we poured a huge glass of the 2006 for Amanda thinking that we were doing the right thing by our hostess-chef, and she almost didn't get the 2007 because she was drinking too slowly.  I'm glad she at least got half a glass, otherwise there might not be too many more dinner invites in the future ...

The 2009 was also bloody good, with more of the effervescent, spritzy mouthfeel, but was a bit too brash, with more pronounced hints of leathery, earthy aromas and flavours.  You could certainly see that with a couple more years in the bottle, it could well turn out like the 2007.

Of course, there's the food too - the goat was cooked in a tray of its own juices, and was just fantastic.  The lamb's leg too was perfect - fully cooked through and just falling apart and very moist.  I must confess that I ate too much - as if drinking too much pinot wasn't bad enough.  But then again, there's no such thing as drinking too much good pinot.

We finished the night with perfectly constructed torpedo-shaped Partagas P No. 2 cigars with a perfect burn, quaffing some Henschke Keyneton Estate 2008 with Wayne (the host) regaling us with a story of the time he was in Sydney with an architect mate and some guy in the fashion industry (Peter something), and they got blind on martinis with a couple of Sydney locals named Baz and Nicole, during which Baz was telling Nicole for the first time about this new project he had conceived called Moulin Rouge ...