I finally had to chance to enjoy some of the fare offered by my favourite Mamasita (not to be confused with my favourite mamacita, of whom there have been several over the years).

Arriving late in Melbourne for another quick visit, my stomach was demanding to be fed, since it was dinner time in Perth, although it was nearly bedtime in Melbourne.  Even in Melbourne, most restaurant kitchens close by 9pm, especially on a school night.  Fortunately, Mamasita stays open until midnight (2am on Fridays and Saturdays).

I perched myself on a barstool at the floating benchtop lining the front wall overlooking Collins Street,  Great for watching the late-night denizens of Melbourne wander past on the street below. 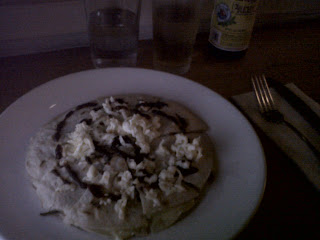 In my previous post, I mentioned the extensive tequila menu.  Well, this time around, I was impressed by the extensive cerveza menu.  No watery Corona or Sol here. I had a Cerveza del Pacifico.  Not cheap at $9, but comparable in price to other imported beers, and a refreshing, flavoursome drink that was most welcome after a long flight. 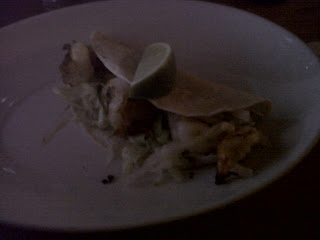 As for food, I went for a $14 Quesadilla de Res, a medium-sized dish of two soft tortilla pancakes (is that what you call it?) with melted cheese and chilli braised beef in between, and freshly grated cheese liberally piled on top, with lashings of some dark chilli-spiced sauce.  Delicious!  Still feeling slightly hungry, I took the waiter's (I don't think they use the word "waitress" anymore) advice and got a Tacos de Camarones - marinated prawns with habanero chillies and chipotle almond salsa.  Three fat, firm and juicy prawns in a soft taco, topped with a lime wedge.  Good value at $7.  Or you could get three of them for $18. 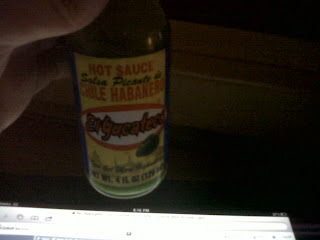 The other fantastic thing for chilliphiles like me is the selection of two MExican habanero sauces - a red and green.  Interestingly, the green one (with a slightly alarming flourescent green hue) is hotter.  They're both nicely textured, thick enough to be easy to mop up with your forkful of quesadilla, but not so watery that it spreads all around the plate.  And the familiar habanero burn creeps up on you, with the heat hitting you in the back of the mouth instead of on your lips and the front palate like other chillies.  I was soon sweating liberally despite the cool Melburnian weather.

The service was fantastic - friendly, chatty staff who were always around whenever you wanted to order something or get the bill.
Posted by The Frenchman at 3:49 PM