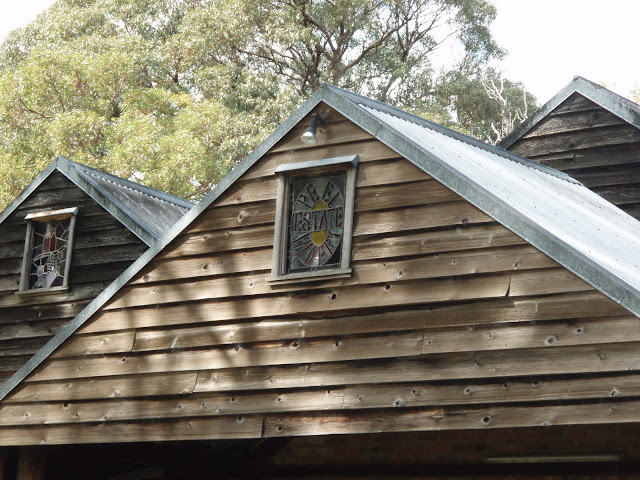 It's 11.45pm and my mouth is still feeling the tannic grip of so many great and powerful shirazes, many of them still in their infancy with another 10-15 years (at least) of bottle ageing to come.  I should be at DJ Dow's 10th wedding anniversary partay but I just can't handle any more alcohol.  As it is, I'm just getting over the seedy feeling that one gets when one starts drinking at 11am and doesn't stop until 5pm.

It's my second year at Peel, and I'm more relaxed and able to soak in the atmosphere now that I know the format for the day. 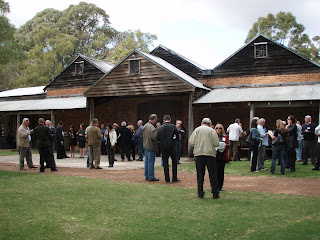 One of the great things about Perth is that you always bump into people you know.  I had a good chat to Michael Hollingdale, who was very nice to me when I was a nobody law student/articled clerk back in the day, but to whom I hadn't spoken to in a long time.  He epitomises how I think an accomplished, well-respected lawyer should behave - dignified, courteous, well-spoken and with a great love of wine.  I have hope yet, since I've managed to achieve one of those attributes so far.

There were of course the usual suspects - my good friend Lynton Barber among them: purveyor of the fine and wonderful, aged and ancient, weird and quirky.  Wines, that is.  I really don't want to share this link, because it'll mean more competition for the good stuff, but check out his website: http://www.sterlingwine.com.au/.  Sterling is the secret to many of the gems in my wine cellar (E&E, Fox Creek and Isole e Olena from the 1990s among them).

David Jones, owner/winemaker at Dalwhinnie (his two Moonambel reds are among my favourites - and so fantastically well-priced to boot!), was the guest of honour this year.  I had the pleasure of chatting to him about some of the wines we were tasting.  David reckoned 2004 was a "true vintage", where the characteristics from each vineyard can be allowed to express themselves.  Lynton, of course, couldn't help having a name-play jest at David's expense.  The department store stuff I can't reproduce here, and yes, they make great whisky too (NOT).

The Great Shiraz Tasting is an annual event that has been ongoing since 1992, and is a labour of love by WA wine industry stalwarts Bill Nairn, Nevile Phillips, Michael Tamburri, et al.  It has seen wine doyens like John Glaetzer, Stephen Henschke, James Halliday, Peter Lehmann and Kevin Mitchell (ahh how I love Kilikanoon) as guests of honour over the years.  According to Nevile this morning, it all came about when he and Bill attended a cabernet tasting at Cape Mentelle, and they had a brainwave - what if Peel Estate hosted an annual shiraz tasting?  It was comforting to see these guys get up and take the piss out of each other - just a bunch of mates having a great time.

Here's how it works - the organisers spend lots of time tasting shiraz from all over Australia, and the best from the old world, and pick the 17 best shirazes.  These join the 3 compulsory shirazes - Peel Estate, Penfolds Grange and Henschke Hill of Grace.

On the day itself, around a 100 attendees work their way through a blind tasting of these 20 wines in 4 flights of 5 wines at a time.  The fun comes from ranking and scoring these wines, and trying to work out what they are.
﻿﻿﻿﻿﻿﻿﻿﻿

As you can imagine, there is great bonhomme and camaraderie, especially as the day goes on, fuelled by the excessive consumption of palate wrenching tannic monsters, and the fun of being fully comfortable with displaying your purple lips and teeth, because everyone else has them too!
At $245 a ticket, it's not cheap, but it is amazing value for money given the wines you get to drink, and the great lunch that accompanies. 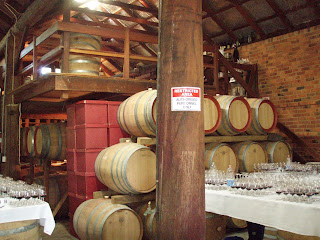 The very close next tier at 18.5 points each were:

While I picked the flight which had the Hill of Grace and Grange, I couldn't work out which was which. I am, however, very pleased with myself for having picked the Rockford Basket Press (one of my all time favourite reds) just by its nose - Jacqs I bet Fred would be impressed!

The other 11 wines were:


The thing to remember is that all of the shirazes are top shelf stuff, but even with the same grape variety, it sometimes feels like trying to compare apples and oranges.

For example, the $150 a bottle Chateau D'Ampuis, its paler red, savoury biscuity aroma and restrained plummy savoury attack, morphing into loads of restrained pepper, fine tight tannins and soft, full mouthfeel, and a seriously long lingering, big tannic savoury finish; is a completely different, albeit still exemplary, beast from the $600 tannic monster that is the Grange, with its blackcurrant leaf nose, very dark, dense colour, with a dark choc (think Lindt 99%) and blackcurrant, shock and awe tannic attack, continuing into a MASSIVELY tannic, leafy, powdery dark choc and plum flavour, and finishing with a lingering tightness of leaf and plum that kept going for the next 15-20 minutes while I chatted to Lynton and David Jones outside.

And then you have the amazingly priced $60 Dalwhinnie, with its deliciously milky vanilla nose, restrained savoury plum attack that leaves you unprepared for the big tannic charge which brings with it a complex, multi-faceted mid-palate of plummy vanilla, powdery dark choc & cherry, and a balancing crisp acidity, finishing with a tight tannic finish of vanilla cherry, that promises many more years of cellaring joy to come (David picked his own wine blind, which is always a reassuring thing for a winemaker to do). 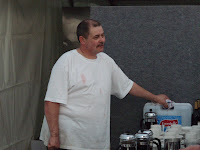 Lunch was served in a marquee in the paddock a short stroll from the tasting barn.  Once again, we were treated to the culinary skills of Andrew Peaston, from Chanterelle at Jessica's (Grand Hyatt complex in Perth).  This big Scotsman was obviously a devotee of the purple, because he would tell all and sundry about Fremantle's 11 goals to 4 lead against the Hawks (it was towards the end of 3 quarter time).

Simple is best - the highlight was the massive slab of roast beef, where very generous slices were carved off for hungry winos.  Perfectly cooked, showing juicy pink on the inside but caramelised crusty (almost crunchy) goodness on the outside!  I don't normally eat dessert, but I had to go for the bread and butter pudding and apple crumble - each a delightful of juxtaposition of crunchiness and creaminess, and not overly sweet (too many people - Peaston isn't one of them - go overboard on the sugar, thinking it makes their dessert taste better - in my view, it makes the whole dish sickening to eat).  Man I have been eating a lot of crumbly stuff lately!

Of course, all of the remaining wine also gets divvied up amongst the tables - we had a Grange, RWT and Isole e Olena amongst our stash.

Here's a tip for the unaware - make sure you head back to the tasting area by 3pm to savour the remainder of your wines with the knowledge of what they are.  I am ashamed to say that despite my vow not to use the spittoons, I found myself first needing to spit out the water used to cleanse my palate, and subsequently (at around 4.30pm) I couldn't down another glass of wine!  Fortunately, I'd already quaffed all my favourite ones by then.

The afterglow of the day's excitement continues to follow me around.  And despite the initial seediness, I don't feel hungover at all!  Must be the Munro Multi-Faceted Hangover Prevention Method doing its thing - more on that another day.