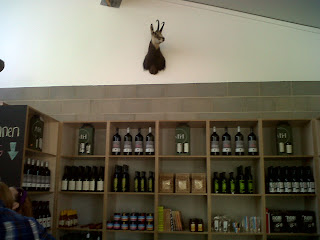 As the FBT year draws to a close (31 March being the last day), I wake up to another day under the brooding shadow of self-inflicted indentured servitude, also known as a novated lease.  It's ironic that on one hand, the Government trumpets the need to save the world (maybe save the cheerleader first? But a fat lot of good it did for Peter Petrelli) by reducing our carbon emissions, and with the other, it hits taxpayers with a massive fringe benefits tax slug if they fail to drive their car for the requisite distance each FBT year.  This regime also creates a strange phenomenon which you may see if you're extra-viligant during March of any given year - people driving vast distances for no apparent purpose.  Anyway, onto more important things - food and liquor (incidentally also the name of Lupe Fiasco's critically acclaimed, award winning debut album - random I know, but I've been listening to it while serving out my driving sentence).

I was down to my last 800 kilometres, so I decided to drive down to Margaret River and back.

The one place I really wanted to visit since it opened last year is the McHenry Hohnen Farm Shop.  And it ticks so many foodie boxes that you simply need to go if you're ever in Margaret River - purveyor of fine, recently butchered meats, so of which roamed free range on the homestead before they ended up in the cryovac pack; a little tasting area with some highly impressive wines on offer; various other food and wine related knick knacks, books, and even Hairy Marron extra virgin (is there any other nowadays? I thought it was only in the Middle Ages when extra virgins were previously in such great demand) olive oil; and a small but impressive range of snacking/sharing meals, which you can eat on the deck outside.

You can buy a whole lamb, or half a lamb. Relax, the pack comes fully sliced and diced, so you get a bunch of chops, ribs, shoulder roasts, and even sausages. $94.50 for half a lamb, which is great.  There are also interesting cuts and sausage fillings - I got myself a pack of Y-bone steaks from Burnside grass fed beef, a luscious slab of Jarrahdene free range pork belly, and a boneless Wiltshire lamb shoulder (from Arkady farm), plus beef and bacon sausages as well as mediterranean lamb sausages.  All for very reasonable prices compared to what you'd pay in the supermarket, but the bonus is that these are different breeds from the ones you'd get in a plastic tray (not that there's anything wrong with those - I buy them all the time), and are supposed to be better flavoured.  Yum - I see a pan-braised Y-bone in a pedro ximenez reduction, in my very near future ...

Now the wines.  Having already enjoyed a tasting session at Woodlands Estate, I had to watch my consumption.  I tried the Tiger Country Red, Rocky Road Zinfandel, and Three Amigos Red and White wines and liked them all. Although David Hohnen is clearly the man when it comes to winemaking, I gather that Ryan Walsh is the guy who puts in all the hard yards on a day-to-day basis. I love the fact that David and his crew are unafraid of forging ahead with different varietals and even different styles.  I guess that being a family-owned business gives you much greater latitude. In this, I liken David to Lupe (see - not so random after all) - presumably in the 3 years after selling Cape Mentelle to LVMH in 2000, his artistic freedom was restricted in the name of profits.  You can't blame LVMH - after all, they are in business for the money.  Just like the big record company wants you to record sugary pop and censors your call-it-as-you-see-it lyrics, replacing it with superficial stuff that the wider public will happily lap up.  I have a bottle of the 1999 and 2000 Cape Mentelle Zinfandels, made by David during this pivotal period.  Now that I know a little more, I must certainly drink them side-by-side with the Rocky Road. 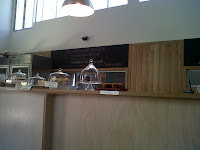 I'm really looking forward to the release of the 2009 Calgardup Brook Chardonnay.  There was none available for tasting, because it's coming out around Easter, but Lisa told me that unlike your standard unctuous, in your face Aussie Chardy, it's made in a Chablis-style, dryer, fine minerally texture, and floral.  Wow. 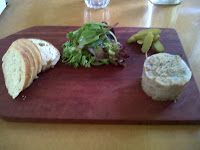 Being a tad hungry, having been driving for 3 hours, I ordered a pork rillette for $13. This is a simple, yet seriously tasty, meal.  Probably designed to be shared, so I shared it with myself.  The pork was creamy and melted in your mouth.  I washed down this tasty meal with a tasty beverage - the Three Amigos White, and it truly complemented the food, which is apparently what this wine was designed to do, so there.

Working in the shop on a Sunday were Lisa and Ryan's sister Emily, who were both friendly and knowledgeable about the foods and wines.  The service is just excellent - Lisa provided old milk bottles with frozen water to help the meats survive the long drive back to Perth, and Emily helped carry some of it to my car, while lamenting that being in hospitality, her weekend is Monday and Tuesday, when all her friends were partying during the real weekend.  My parting bit of life advice to her was this - if anyone ever offers you a novated lease, say NO.
Posted by The Frenchman at 1:14 PM