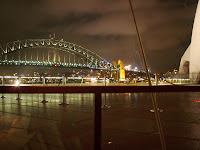 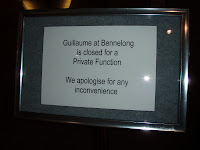 World class food and wine, great company, set in one of the modern wonders of the world, and only 60 people to experience it. And I was privileged to experience it last weekend.

One of France's most celebrated chefs, 3 Michelin starred Eric Frechon came to Sydney last weekend to share Guilliaume Brahimi's kitchen at Bennelong, in the picturesque surrounds of the Sydney Opera House. Eric, who is the Executive Chef of the iconic Parisian lodging, The Hotel Le Bristol Paris, has not only been awarded the highest honour in the culinary world, but also the highest civilian award in France, the Legion D'honneur.  His fans include French president Nicholas Sarkozy, for him he cooks at State dinners. 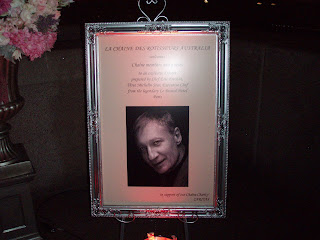 The occasion was the flagship (in my humble view) La Chaine Des Rotisseurs Australie dinner of 2011. The 7 course dinner was exquisite, made more so by the highly professional front of house team at Bennelong. This was driven home to me at the start, when, after I decided to take a stroll up the Opera House stairs instead of taking the lift from the drop-off bay like more sensible people, I discover that the doors to the dining area are locked and cordoned off. But when Veronique sees me standing haplessly outside, she comes straight out, unhooks the velvet rope, and welcomes me like I was being expected. 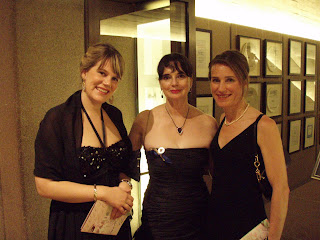 The dining room was set off to the side of the main arches of the Opera House, and completely ensconced in a cupola of glass panels, to allow a perfect view of the surrounds, replete with hordes of sticky-beaking tourists.

Not only did he turn up with wife and publicist Clarisse in tow, but also the head sommelier, pastry chef and commis, in order to bring some haute cuisine to Australia. According to Caroline Roux, the Le Bristol Director of Sales, they stayed on until Wednesday to make the most out of having journeyed halfway across the globe. 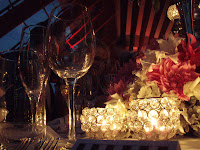 Now, onto the food and wine! The tone was set during the pre-dinner drinks with a seemingly endless supply of Pierre Laforest Cuvee champagne, a very rare single vineyard boutique offering from Epernay, comprising a blend of Chardonnay, Pinot Noir and Pinot Meuniere. This champagne has a lovely soft mouthfeel, very fine mousse, muted citrus flavours and a smart crisp, lingering, lemony finish. Unlike some mass produced NVs which get harder to drink after the first couple of glasses, this is eminently drinkable. So much so that I must have sipped away on at least 3 glasses before we sat down at the table. So be warned - my champagne-addled recollection is somewhat patchy.

Eric's signature approach is apparently to combine sea and earth in every dish, and this night was no different.  While all of the dishes were exquisite in their taste and presentation, the highlights for me were one of the canapés and the entree.

Firstly, the crayfish canapé with a touch of celery and yuzu cream. The cream had been applied over the crayfish so perfectly that it looked like a round, glistening chocolate truffle (albeit with a green tinge from the celery), nestled in a Chinese soup spoon. The magic happens when you bite into it - the ephemeral "shell" around this morsel puts up no resistance, until your teeth reach the half-cooked crayfish, which is a delightful textural combination of chewy and squishy. 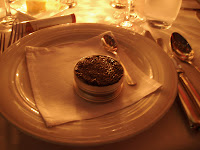 Secondly, the osetra caviar served layered in a little tin over a bed of haddock infused potato mousse puree. The rich, fishy, salty flavour of the caviar is perfectly counterbalanced against the smooth, buttery and superbly light mash, although I couldn't really taste the haddock, probably because I had already downed about 5 glasses of champagne by then. This caviar is sustainably farmed from Californian sturgeon, so it was a guilt-free feed. 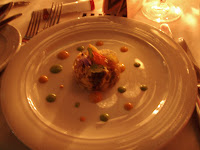 Special mention must also be made of the chicken cooked in a bladder (I hear you say "WTF?!", but it's not actually crayfish bladder, silly - you'd be hard pressed to find a giant crayfish with a large enough bladder) of sautéed crayfish and the chicken broth with truffles and leeks, served at the same time.  The latter chicken was not dry, but not juicy either. Just a very tender "just nice", as Goldilocks would have said. The former is a deliciously rich and fortifying mixture, just the thing for a poor bloke who would have consumed about 9 glasses of wine by that time.

The rest of the courses are described below, as well as the wines, which were all shades of delicious, refreshing and sublime.  I was unexpectedly pleased by the Rochas white port from Portugal. Unlike the sickly sweet, unctuous stuff you normally have to make do with, this had a dry, sherry-like flavour and finish.  I swear I don't remember drinking the Chateauneuf du pape, and for that I feel a sense of great loss. Surely it's not because I drank way too much? Oh well, what can I do when the wines have been selected by a world class sommelier?

The table gifts were a nice little touch. A Romeo y Julieta No. 3 (Cuban cigar for those of you who don't know) for the gents and an Hermés perfume sampler for the ladies. The choice of cigar was a nice touch - as the focus of the evening was on the food, there would be little time for smoking, so a smaller, but still flavorsome cigar is in order. I would have preferred the more robust but citrusy flavours of the El Rey Del Mundo Lunch Club, but the RyJ is a more universal cigar, suited to a wider range of palates and cigar-proficiency.  As it was, we were having so much fun that I don't think anybody wanted to go outside for the half hour you needed to smoke the RyJ.

So, we have food, wine, and location. The final element of an excellent dining experience is the company. And I certainly had good company and great conversation at my table, with and interesting and diverse range of people including an airline pilot, security guy, former rock band vocalist, and even a mining company spruiker!

Eric himself is a congenial, down to earth man. Despite his limited English and the fact that he is very busy and in great demand by the kitchen and fellow diners, he makes an effort to chat to a humble faux-Frenchman about the food and the weather. 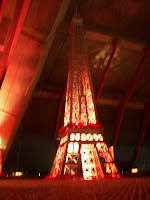 While Eric may have been the hero of the evening, the heroine of the evening is most certainly Jannece Tapsall, La Chaine's national Chancelier in Australia. Jannece has spent more than a year trying to organise this dinner, which was originally to be held at the Palazzo Versace's ritzy fine diner Veritas in Queensland last year, until a last minute demand for Eric to cook at a state dinner for Nicholas Sarkozy scuttled those plans. Talk about getting your lunch (or dinner in this case) cut. Jannece has subsequently spent an enormous amount of time, energy and effort to make sure that the dinner at Bennelong went ahead, even personally selecting the decorations in the dining room, table place settings and flower arrangements. There was even a replica of the Eiffel Tower! Thank you Jannece for bringing some Parisian culinary savoir faire to Australia!

In keeping with the French theme, I opted to stay at the Sofitel Wentworth. This establishment with French origins offers a service that is well and truly a cut above the efficient, friendly but ultimately functional business accommodation that I usually experience - people smile at you but getting them to do something for you is often a stressful exercise.  Not the Sofitel. Nice little touches include L'Occitane toiletries in the bathroom and staff greeting you with "bonjour" when they pick up the phone.  The Club Sofitel is also one of the better hotel club lounges I've experienced, with friendly staff and large, spacious areas with comfortable furniture offering seclusion and privacy if desired. It's not the cheapest, but isn't the most expensive either, and well worth the price.


By some strange twist of coincidence, the guy who drove me to the airport was the same one who collected Eric and Clarisse on their arrival in Sydney.

What a fantastic weekend indeed. C'est jamais assez!
Posted by The Frenchman at 1:53 AM