The Governor's Farewell dinner at The Western Australian Club

Now that the Governor is retiring, there is the inevitable barrage of farewell shindigs that get put on. 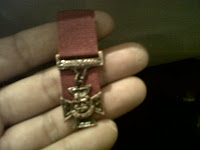 I was privileged to attend an exclusive black tie and military miniatures farewell dinner at my beloved Western Australian Club for an intimate group of 40 guests. Amongst the plebs like me were scattered an assortment of interesting characters, including a couple of renegade MPs who were wagging a session of Parliament which was sitting at that time. My table was heavy on the military, with the His Excellency's Aide de Camp, and my fellow Club members, a retired major and retired major general, who was incidentally the proud father of the latest winner of the Victoria Cross, and rightly so. We got to check out a replica VC ribbon that he took with him everywhere - that's as close as I get to the real thing, I guess. Also a movie industry veteran, owner of a recruitment business, art dealer and a well known white goods retailer who's recently started up a new venture.

Food as usual was top notch, with Executive Chef David Gallagher and his team consisting of Emma and Tay, once again delivering excellent fare. The highlight for me was the entree of pan fried tiger prawns with chilli infused angel hair pasta and salsa verde. Fresh, firm prawns, with a nice spice to the al dente pasta, if a little bit strong on the lemon. I must admit that I was also highly envious of Simon's duck confit, which looked oh so tender and was literally falling off the bone; and Lesa's creme brûlée desert, which looked to be perfectly made with a beautiful caramlised crust.

I even learned something new - the Governor, like many proud West Australians, is a migrant. He hails from a little Greek island from which originated a whole bunch of other West Aussies who are also fine upstanding and highly successful members of society - big contributors to the professions, charity and the arts. Must be something in the water there ...

Great company and great food - all good!
Posted by The Frenchman at 2:41 PM