﻿﻿
﻿﻿ I was just browsing through my whisky collection the other day, and remembered that I own this interesting bottle that I picked up at a Sterling Wine auction: The Royal Household Scotch Whisky.  There's a handwritten notation on it saying: "Xmas 1937".

There's also quite a bit of detail in the closure - it appears to be a lead foil cap which you find on older bottles of wine or whisky.  The embossed words say:


DISTILLERS
BY APPOINTMENT TO
H.M. The King
AND
H.R.H The
Prince of Wales
James Buchanan & Co, LTD 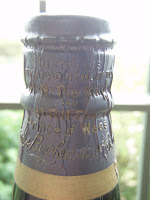 Seems authentic enough for a bottle from 1937, since the last male British monarch was George VI who reigned from 1936 to 1952 after his elder brother Edward VIII famously abdicated to marry an about-to-be twice divorced American socialite.

I decided to research the origins of this enigmatic Royal Household Scotch Whisky, but there's surprisingly little to be found about it on the internet.

Jim Murray's 2007 Whisky Bible calls it "a wonderfully sophisticated blend",  I must admit that I have never been a fan of blended whisky, and prefer my single malts (and now my straight ryes too!), but that's still a pretty good endorsement from the world's leading whisky expert. 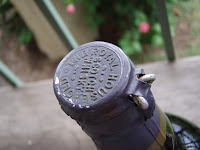 The present-day incarnation of The Royal Household Scotch Whisky is sold only in Japan by James Buchanan, which is now owned by Suntory.  James Buchanan apparently started supplying whisky to the Emperor of Japan back in 1907. 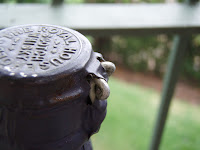 So how much does it cost? The present-day version costs around USD300, it seems, based on a bit of trawling through Japanese liquor websites.  Malt Whisky World advertises a bottle of The Royal Household Scotch Whisky from a battered cardboard box for £2,250.00.  This particular bottle appears to have a screwcap closure.  My bottle on the other hand has some kind of clever hinged closure - as you can make out from the pictures.  The top of the cap itself says: "The Royal Household Scotch Whisky"

What's mine worth?  Who knows, and who cares?  Like my 1990 Mouton Rothschild,  I plan on drinking it on a very special occasion with good friends who are going to enjoy and appreciate good whisky.  You can't take it with you, so you might as well enjoy it.  On the other hand, if someone were to make me an outrageous 6-digit offer, well, maybe I'll consider parting with it.  Otherwise, you're going to have to journey all the way to Rodel or befriend a member of the British royal family for the uncertain chance of tasting it, or be one of my good mates when I crack this baby open ...
Posted by The Frenchman at 9:46 PM