Okay - the long awaited gratuitous Namibian holiday photos taken in December last year.  Well, some of you must have been waiting, right?  These ones were taken at Erindi Private Game Reserve, or on the journey there.  The beer photo was taken at Joe's.

Anyway, I thought I'd try to craft some prose around the photos, which is why it's taken so long. I've finally accepted reality and given up on that dumb (and immensely time-consuming) idea.  So I'll just chuck in some commentary here and there instead.

Namibia is very cheap compared to Australia.  From the takeaway store, you can get king browns (750ml bottles for the uninitiated) of Windhoek Lager for the equivalent of AUD2 a bottle!  Pictured is Urbock, bock bier produced by Namibian Breweries.  Namibia used to be a German colony, and all Namibian beer is still brewed according to the German beer purity laws.  Which makes for damn fine beer (and this coming from someone who doesn't like drinking beer!) at some ridiculously cheap prices.

There a strange phenomenon on the main highways leading in and out of major Namibian towns - police roadblocks with corporate sponsorship.  The picture shows a banner of the First National Bank of Namibia.  And no, Namibian police don't take bribes, so don't offer them one unless you want to see the inside of a local lock-up.


Funny thing about this picture is that if I didn't know it was taken in Namibia, I would have thought it to be your quintessential Australian country highway!


According to our game guide DuVries at Erindi Private Game Reserve, the millipede's shell contains cyanide, so the animals stay well away from it.  There was supposedly one famous millipede researcher who died of cyanide poisoning because he spent every day in an enclosed room with hundreds of millipedes.  His poor wife was accused of the crime until authorities had a little science lesson...
Apparently, these termite mounds all originate at the base of a tree.  As the mound gets bigger, the poor tree dies (unsurprising, with thousands of termites gnawing away on it from the inside).  Eventually, the mound completely covers the tree, and the remnant branches are eaten away.  Quite clever of the termites, actually, since it's handy to build your home around a permanent buffet!

Elephant at the watering hole overlooked by the observation lounge at Erindi.

Sorry - this is an in-joke, involving The Jackal.  If you play poker with me and the boys on Wednesday nights, you'll know what this is about.

There's apparently a deer called the duiker (meaning diver in Afrikaans, because it dives straight into the bush to hide when startled).  I didn't manage to get a photo of it, but it looks like, well,  a small deer.  The duiker actually eats meat on occasion.  You know, frogs, turtles, mice, etc.  You'd be pretty bummed to be a mouse scurrying around the ground foraging for dinner, when you look up into the duiker's gentle dark eyes and go - oh it's only a deer, I'm safe - when it snaps you up and chomps you down.  What a crappy way to go eh?  It would have been more respectable to have been taken by a jackal or an eagle ... 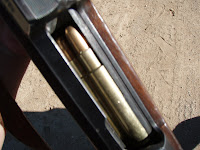 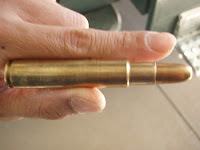 This is the breech and bullet of the game guide DuVries's rifle, a Rigby 416, or elephant gun. As you can see, the bullet is massive - it's longer than my finger.

Rhino dung. Surprisingly scent-less.  Don't ask me how I know.  I just do.  It's also very light when it's been sitting in the African sun for a few days - all of the moisture evaporates, and you get this lightweight, hard, dessicated lump.  Fascinating.  Really ... 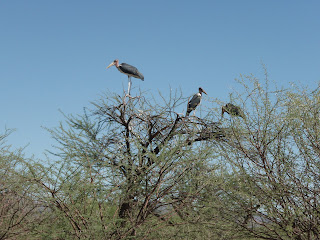 Don't be fooled - these Marabou storks are massive mothers.  But they can obviously fly, and those branches are stronger than they look!
A very rare Black Rhino - this photo was taken at dusk, just after my best mate Brandon's wedding.  This guy is massive. 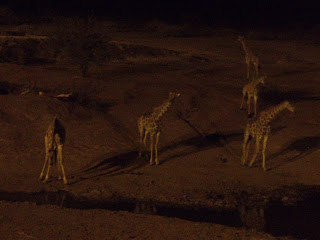 A nocturnal family of giraffe.  According to Roysie the Australianised Englishman, the proper collective noun is a kaleidescope of giraffes. 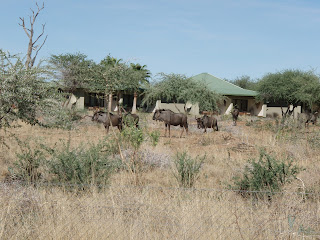 This is how close the animals were to the chalets.  Of course, the discreet electric fence running between you and the animals helps to provide some comfort. 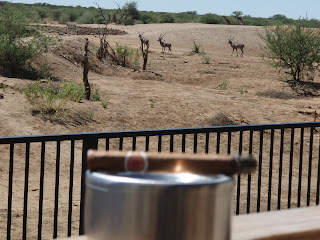 Three juvenile kudu in the background.  And of course a Romeo y Julieta No. 2 in the foreground ... 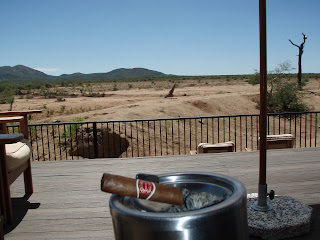 An inquisitive baby giraffe poking his head out from behind the hill in the background. And of course the distinctly shorter Romeo y Julieta No. 2 in the foreground ... 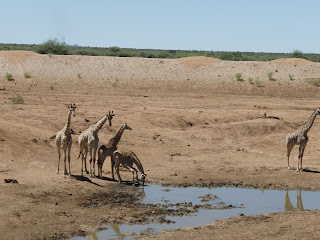 These giraffe are thirsty. 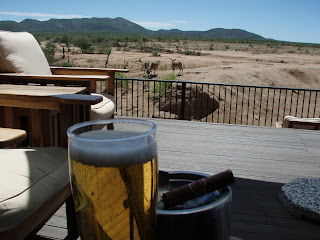 Kudu does in the background.  And the ubiquitous Romeo y Julieta No. 2 in the foreground. It's thirsty work, so I had to order a Windhoek Lager to help with the heat ... 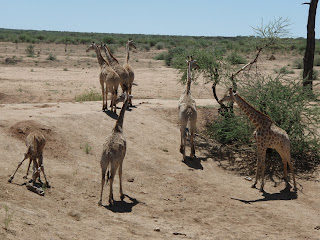 Kaleidescope of giraffes up close. 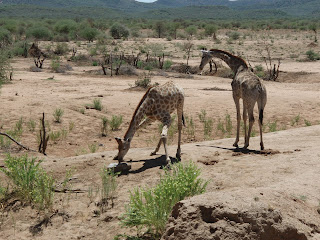 No it's not what you think! Scrub your filthy mind.  They're just going for the salt lick.  I mean, they're licking the salty rock.  Hmm ... that didn't come out right did it. 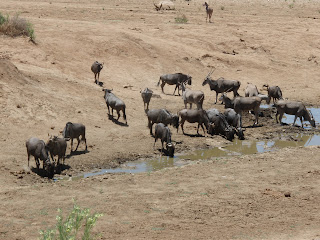 Rush hour at the drinking hole - kudu, oryx and wildebeest.  Makes me think that it's time for a nice barbecue!

A rare painted African wild dog, one of the handful of survivors of a lightning strike that killed 16 other members of their pack. 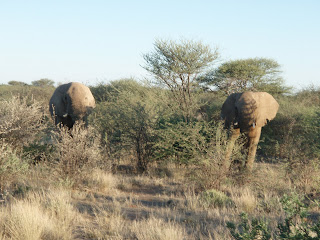 You get a feeling of mortality when two huge mofo elephants decide to take an interest in you, and there's nothing between you or them but 20 metres of open ground ... 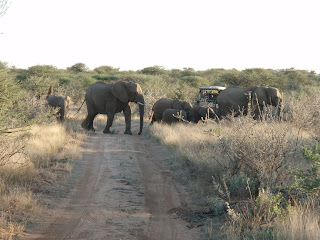 Herd crossing the road. Check out the babies and juveniles.  You might also catch a glimpse of the other safari truck behind the herd, to the right.  They must be shitting themselves right about now. 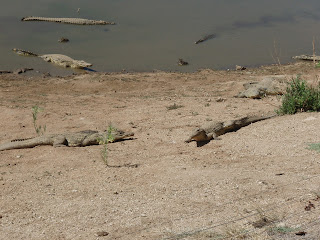 In the harsh light of day, it's clear that the waterhole is full of crocodiles. 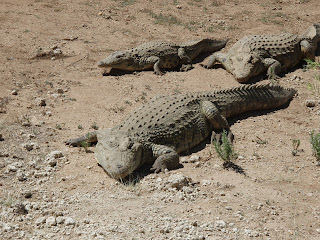 The game guides assure me that these crocodiles only eat fish they find in the water hole, and they don't even try to eat the deer.  If that's the case, why do all the deer choose to drink at the really shallow end, all squashed up against each other? 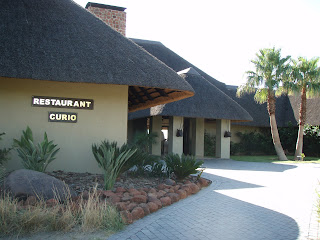 This is where the observation deck can be found as well. 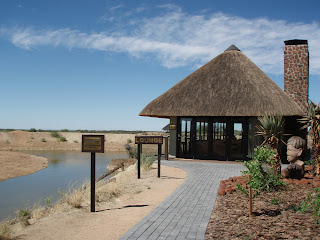 The observation lounge overlooking the waterhole - safari de luxe!
Posted by The Frenchman at 8:02 AM