As soon as I checked into the Sofitel Wentworth in Sydney on Saturday night, I joined fellow Perth-dwellers Wayne and Amanda and their Sydney-based friends at one of the many restaurants in that iconic Sydney nightspot, The Ivy. It really helps to have your name at the door at 9.30pm on a Saturday night, because the queue was diabolical. Why anybody would want to endure the ignominy of standing in a line just for the opportunity to spend money escapes me.

I met Wayne and Amanda in Sailor's Thai restaurant on level 2, just as they finished their meal and were about to move onto dessert.

I have to say that the waitstaff, especially Peter, who was looking after our table, were absolutely fantastic. On arrival he offered me a couple of choices to eat, and I opted for the fried calamari, which arrived very quickly, was nicely presented and very tasty.

They then brought out a selection of desserts. A modern take on your traditional Thai and other Southeast Asian favourites, although they weren't necessarily recognisable at first glance. Among the tasty treats were a dry pulot hitam (sweet glutinous black rice) drizzled with coconut cream, sweet glutinous white rice served up in a little bowl creme brûlée style under a hard coat of caramelised sugar, and my favourite, a mound of green sago pearls topped with a drizzle of coconut cream and slivers of dried coconut. The first thing that came to mind was frog eggs topped with frog sprog, but really, it's actually quite good!

Dinner conversation was great. One of Wayne's Sydney mates (some chap who used to lease a shop from him, also called Wayne) is formerly from the UK, and we had a good chat about jellied eel, mash and parsley liquor. I would love to try that iconic English dish one day soon.

﻿﻿ ﻿﻿
The only downside was that as the night wore on, the restaurant gradually transformed into a nightclub, as more and more punters were allowed into the dining area and the music was incrementally ratcheted up. Apparently, The Ivy spends a million dollars a year on DJs, and if you've been a DJ at The Ivy, you can get a gig anywhere else in the country. So the music is actually quite good. But not so enjoyable if you're still trying to engage in dinner conversation. I guess that they need the space so that they can let in more people, given liquor licensing headcount restrictions are linked to available floor space. But it still makes an otherwise excellent dining experience unpleasant at the end. To his great credit, Peter did his best to ease the pain, including finding a "quieter" table away from the bar, which was fast getting crowded. Unfortunately, the music noticeably cranked up a few notches moments after we sat down at the new table. 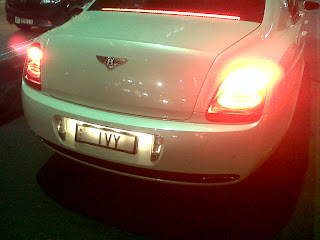 Fortunately, there was one final treat in store to end the night on a high note. We got the celebrity treatment by being whisked through the back corridors, down the service elevator and into the loading dock, where we were taken away by the Ivy's Bentley to an undisclosed location for more partying.

Oh all right, my mate Gumi reckons that this was a really pretentious posting. Hell yeah - I agree that this is as wanky as it gets. I promise. Sorry I just couldn't resist being a tosser for once.
Posted by The Frenchman at 5:15 AM