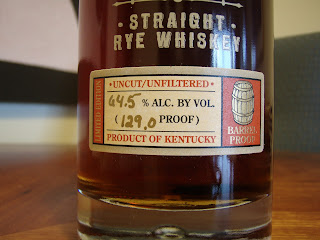 Christmas has come early.  My mate Elliott has come through with the goods - in a big way!  He has managed to procure a few bottles of the Thomas Handy Sazerac.  After having drunk this Kentucky straight rye on two occasions (Helvetica and the Malt Supper Club), I am truly a convert.

At 64.5% alcohol by volume, or 129 proof (ie barrell proof), a little whiskey goes a long way.  I am sipping appreciatively on a glass as I type (yes I know it's breakfast time, but you're allowed to drink a little on Christmas morning! And besides, it's a only small glass ...).

I know I've taken a lot of pictures, but I can't begin to tell you how much this drink has completely revolutionalised the way I look at whisky/ey.  I used to be an exclusively Scottish single-malt snob, but no more.  Don't get me wrong - I still love single malts, and will keep drinking them, but my horizons have now been conclusively expanded to include other expressions.  It also helps that Jim Murray has rated this the 2nd best whisky/ey in the world in his 2011 Whisky Bible.

Elliott runs a bottleshop at 237 Great Eastern Highway called Mane Liquor.  Don't be fooled by its location.  There are some really special wines on the shelves.  And they have an insanely huge range of beers, quite possibly the largest range in Western Australia, if not the entire country.  Go check it out for yourself - you'll be astounded.  If you like your beers, it feels a bit like being a kid in a candy shop.  There's still one bottle of Sazerac left on the shelf, if you're quick enough.

I also picked up a bottle of hell and damnation.  No kidding - that's what it's called, in Dutch anyway.  At 10.2% alcohol by volume, that's how you might feel the next day if you polish off an entire 750ml bottle on your own.

Hel & Verdoemenis, brewed by Browerij De Molen in the Netherlands, is a dark rich stout that is made with cognac.  Goes well with a cigar.  The label proudly trumpets that " This beer will be good for 25 years if kept Cool and dark"  Not sure why they capitalised the "Cool".  But hey, it's the Dutch.  And they make good beer!
Posted by The Frenchman at 10:51 PM