I recently had to go to Melbourne for the first time this year for a board meeting, so I decided to look up Google for a new quality Melbourne establishment to check out.  At the top of the search listings was the name Andrew McConnell, and I couldn't go past that, having been a fan of Golden Fields and Cumulus.

Located at 180 Flinders Lane, Supernormal is just around the corner from the Westin, the front is so quiet and nondescript that I would have walked right past it if not for the beguiling neon lighting and the fact that it was pumping.

I walk inside and get greeted with a fateful of classic minimalistic McConnell decor, with loads of kitschy (but in a good way) Japanese touches.  And of course, the maitre d' - don't you love going to a restaurant where you don't have to stand around like an idiot hoping to get someone's attention so you can be seated?  With an over-abundance of staff, you never have to worry about this at Supernormal.

As expected, there was a queue, but because my dinner companions had abandoned me due to a late and crappy flight into Melbourne, I didn't worry too much - there's always room for one.  The friendly, chatty staff were surprised that I was from out of town, since they had only been open in this location for a few months.

By the time I finished my first glass of crisp, delicious Glaetzer-Dixon Uberblanc riesling, my seat was ready, and I too was ready for a feast of overindulgence!

The menu is predictably full of Asian influences, but it looks like the last decade's Melbournian Pan-Asian approach (read Thai, Southeast Asian, etc) has moved to predominantly mainland Chinese with Japanese and Korean touches (albeit complete with the classic Golden Fields lobster roll, which you can even takeaway, for those in withdrawal!), and the table setting at the bar included cutesy little touches like a sesame seed mill and a pot of chilli.  And a limitless little saucer of more-ish soy-roasted seeds.

One of the many great things about this restaurant is that they will also do half-serves for the single diner, which is great for those of us lone travellers who want to try more dishes but don't want to pay the price of having to buy a new pair of larger pants.

I start with a dish from the raw menu: spicy tuna and ama ebi prawns, accompanied by the Junmai Genshu "Ine Mankai" sake, made from red rice which truly lived up to the notes on the menu - smoky with cherry flavours.  I could have told you in excruciating detail about how the tuna and prawns tasted, but it was so good I scoffed it down too quickly. 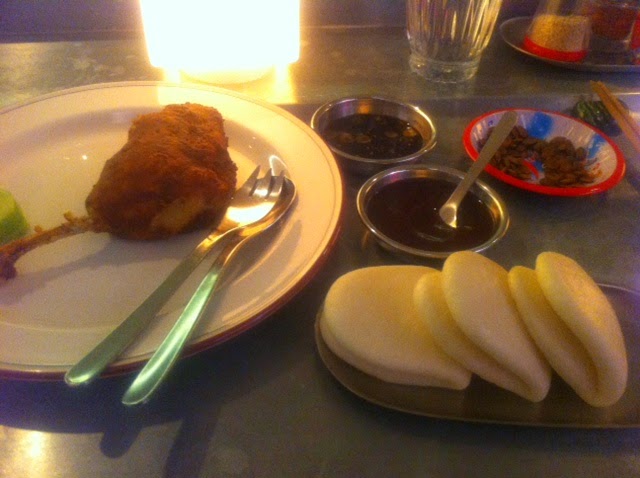 Then of course, I had to order the duck bao - if you ever eat at a McConnell restaurant - you need to order the duck.  A beautifully presented drumstick of twice cooked duck - presumably oven roasted and then deep-fried (so good) until the skin was crunchy, flaky and crispy.  Kentucky Fried Duck, not that there's anything wrong with that.  The idea, of course, is that you slather the little buns with the sauces and condiments, tear bits of duck off the drumstick for filling, and chow down.  I couldn't help but eat some of the duck on its own before catching myself and doing it the "right way".  The red rice sake really came into its own here, perfectly complementing the rich flavours of the duck and the over-slathering of hoisin sauce I liberally painted over each bun.

I then ordered the szechuan chicken with peanuts, chilli oil and house made noodles.  Hmmm it must be a new Melbourne culinary style to serve noodles that don't actually look like noodles.  Well, I guess they did look like those packing noodles you get in a parcel.  But these were great - like an Asian gnocchi; soft pillows of chewy … err noodle-stuff.  The balance of flavours was spot on - enough szechuan peppers to give you a slight tongue-numbing experience, but not so much that you felt like you were at the dentist for a root canal procedure.  I washed down with the "River in the Sky" - the Junmai Ginjo "Nagarawa Tenkawa".  The menu says it's "wonderful with spicy food", and it's right.

And finally, on the recommendation of my fellow frequent traveller Kimmie, I ordered dessert despite the fact that I was now quite stuffed: the Peanut Butter Parfait.  Even though I haven't eaten a Snickers bar in more than 10 years, I will tell you that it tasted like Snickers.  Thick, rich, chocolatey, peanutey and thoroughly decadent.

Next time you're in Melbourne, do yourself a favour and pop into Supernormal for something special.  Yes, you will have to queue, but being able to drink a glass or two of wine while you people-watch is quite painless.