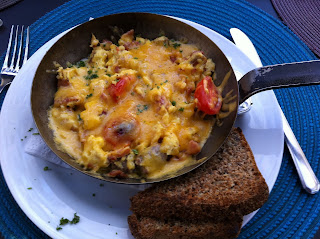 Fresh n Wild is fast becoming my favourite casual dining venue in Windhoek!  Yes I know that this is the third review, but it's all about incremental restaurant reviews, isn't it?

My previous experiences involved lunch, so for a change, I had breakfast there on a nice warm Saturday morning.

It was 8am, and there were only 4 or 5 tables of diners, so the service was quicker than usual, and cheerful as always.  This time, I got a printed menu; the chalkboard must just be for lunch. 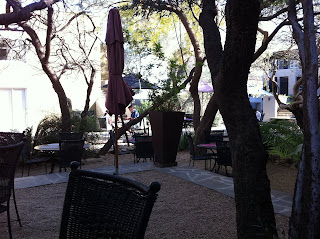 On the previous two occasions, I opted to sit on the deck running along the long rectangular fishpond, but since that seemed to be a rather popular spot, I opted for a table under the shade of the trees instead.  As you can from the picture, it's a fair way off from the pond tables (which are in the sun).  Don't worry - I bring up the tables by the pond for a reason - I will comply with the Chekov's gun principle ...

There is a huge range of breakfast options for the hungry diner.  Everything from a light healthy bowl of crunchy roasted muesli topped with live (wtf?!) yoghurt or a croissant accompanied by butter and jam, to good ol' bacon and eggs, all the way to massive dishes like the Breakfast in a Pan: eggs, sausages, bacon and tomatoes, topped with a heart-clogging amount of melted cheese.  Naturally, I couldn't go past that challenge, and ordered myself one Breakfast in the Pan.  This is an absolutely delicious dish - I fully believe in a big, full-fat breakfast, and this ticked all the boxes!  But flavoursome too.  The tomatoes added a nice counterpoint to the cheese and egg, and the toasted brown bread perfectly complemented the food in the pan, adding a nutty flavour and chewy texture to the experience.  At N$50 (around AUD6-7), this is great value!

I also took a chance with an espresso (again ordering half a cup), and it wasn't too bad, despite coming out at two-thirds full (it was a pretty big espresso cup, mind you!).  Nice flavour, decent crema, and reasonable strength.  And at N$9 a cup (around AUD1.50), this is good value. 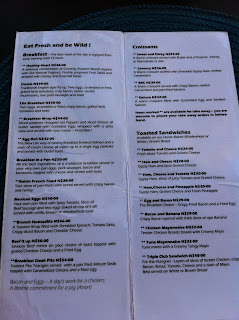 While waiting for my meal to arrive (it's freshly cooked to order, so I'm happy to wait for quality), I even got some entertainment from the American couple sitting at one of the tables by the fish pond.  How do I know they're American, and why was I being so nosey?  Well, if someone talks really loudly with a strong accent, it's hard to ignore them, even when you're sitting at the other end of the courtyard.  Now, don't get me wrong - I have American friends and they're all fantastic, level-headed and highly intelligent people.  But whenever I travel, I seem to come across these randoms who epitomise that (perhaps unfair) stereotypical American tourist or expat.

Anyway, I only started paying attention to their conversation when the bloke starts raising his voice when he says to the girl. I try to ignore it, but he just keeps going on.  And then he exclaims: "You're lying!".  So I think hello, what's this?  And this is kinda how the conversation goes.  The man is saying to the women that she only ever pays attention to a movie when a good looking guy appears on screen, but she doesn't do the same when a hot woman appears.  Then he goes on about how superficial she is, and sets her a hypothetical challenge - what if she had to choose between two guys, both with great personalities, but one looks like Brad Pitt, and the other is fugly - which one is she going to choose?  I couldn't hear her responses, because she spoke at a more discreet tone.  But his voice just keeps getting louder as he speaks.  Normally I would be annoyed by this breach of the serenity, if not for my efforts not to chuckle.

But mate, seriously, firstly, heterosexual women who also dig other women?  That is one of the oldest male fantasies.  Of course, that may be true for the lucky few blokes (maybe not so lucky - remember what happened to Ross Geller from Friends, for you Gen X-ers out there), but it doesn't necessarily mean you get to participate.  And as for women being attracted to good looking guys?  Isn't that just the reality of it?  Why are we men allowed to like hot women, but deny women the enjoyment of ogling men?  Let's face it, we're all superficial at some level.  In any event, the scenario he posed isn't much of a dilemma - a better dilemma for the girl would have been a hot man who is an arsehole, and a fugly guy who has a great personality.  But then again, a massive body of anecdotal evidence exists to suggest that the girl will choose the first more often than not.

Anyway, I digress.  This blog is about food.  But then again, it's also about the experiences surrounding food.  And this was certainly memorable.  And enjoyable.

And you happen to the be American chap who featured in the exchange above: mate, when you choose to raise your voice in a quiet, public venue, you waive your right to any privacy.
Posted by The Frenchman at 8:33 AM