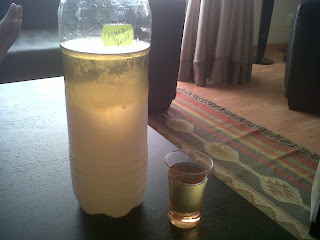 The advantage of hanging out with a family of Russians is the exotic (at least to me) culinary experiences you get to enjoy.

First and foremost is the самого́н (samogon). Essentially Russian moonshine.  Because all samogon is homemade, they differ vastly in quality and flavour.  This particular one is an old family recipe, perfected after many decades of experimentation (and possibly blindness) over 25 years ago, it is now sublime.  As you can see from the label on the bottle, this is the Super 2010 vintage.  The bottle shows frost from being in the freezer, which is how all good moonshine, vodka or not, should be kept. 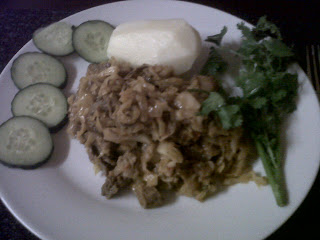 I'm sure it's made from potatoes, with lemon peel added for flavour.  But I'm not sure and I really don't care.  At 53% alcohol, it's a bloody strong drink.  The Russians (and Brandon) like to shoot it.  I personally think that's a waste of a flavoursome, unique drink that deserves to be sipped.  Besides, standing in a circle and shooting more than 7 shots (I lost count after the 7th shot - heck I lost track of time itself) is just asking for trouble.  Doesn't matter whether you're drinking samogon, whisky or even red wine (yes I may have done that too but I'll never admit to it ....)

To help stomach the excess of samogon is a hearty meal of Russian farm fare.  Sauteed cabbage, I think, mixed through with meat (which happens to be the remnants of my kudu knuckle from Joe's Beerhouse), with cucumber and coriander garnish.  And yes, that's a potato.  Useful things, potatoes, with many uses.  You can boil it, you can mash it, you can ferment it.  Ahhh.

The next thing, of course, is authentic Russian блины (blini), cooked by an authentic (if still young and krasivaya) Russian Babushka.  Blini are really just Russian pancakes.  But unlike the pancakes you're used to, these are wafer thin (best to keep them away from Mr Creosote).

But try wrapping up some cabbagey kudu in a blin (singular for blini) for variety.  And spreading fresh home-made strawberry jam for a sweet option.  Or figjam, for that matter. 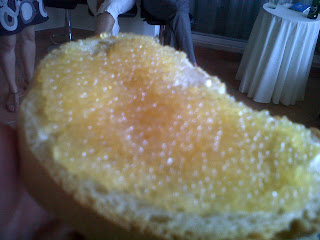 Lastly, just because it's no longer legal to get sturgeon caviar doesn't mean we have to make do with only ocean trout caviar.  There's also pike caviar, which is actually nicer than the red stuff.  The eggs are smaller and finer, and the flavour is less robust, but still flavoursome.  And it goes much better with champagne!
Posted by The Frenchman at 11:04 PM