Last night, the Frenchman caught up with old school mate Wu Xi while transiting through Hong Kong on his way to the African continent.

Got at least 4 hours to spare while you're transiting through Hong Kong? Well, don't waste the opportunity under the artificial lighting of the airport (although it must be said that Hong Kong airport is huge and modern, with more than enough things to keep you busy the entire time - it's so large that you need to take trains to get to some piers of the airport!!).

Anyway, be a bit more adventurous and take yourself out throughout customs. It is a breeze and the prospect of a full body cavity search by a rubber gloved customs officer is extremely low, unless you are a sweaty, nervous looking fella with shifty eyes and who looks fat but has a skinny face). 15-20 minutes tops will see you from the door of the plane to the Arrivals Hall.

Before you go out into the Arrivals Hall, there is a little ante-area containing a money changer and a ticket counter for the Hong Kong Express. The Hong Kong Express is a fantastic service which takes you from the airport to Hong Kong Central Station on the north shore of Hong Kong Island in 24 minutes.  And back again. And this train runs every 12 minutes each way.  Now this may be counter-intuitive, but you need to buy the train tickets first before you go to change your money, because the immigration officials won't let you walk back against the flow. Don't worry if you miss this chance to buy tickets - there's another ticket counter in the Arrivals Hall.

Once in Hong Kong Central station, you're in the thick of the action. There's a massive shopping centre / office complex above the station (International Finance Centre, or IFC as the locals call it), and numerous other shopping options are jam-packed within walking distance. It's also a couple minutes walk from Lan Kwai Fong, famous for its streets, lane ways and alleys full of bars and nightclubs. There are also plenty of eating places in this area, ranging for really expensive restaurants with overcapitalised fit-outs, to cheap, cheerful, and (as an added option) even dodgy places.  Put simply, there are more things to do here than the amount of time you have - make sure you allow for at least an hour to get back to the airport, to account for waiting time, train time, customs and security clearance, and a bit of duty free shopping. Oh and did I mention that it might take you as much as 20 minutes to make your way to your boarding gate? Underestimate this time at your peril! Especially since the flights start boarding 15-20 minutes before their scheduled departure.

Minor technicality - I was dressed for an African summer, and only found out when we landed that the temperature in Hong Kong was 10 degrees celsius!!! Fortunately, I was saved by the proliferation of shops - a quick trip to Zara netted me a cheap woollen sweater.

Anyway, Wu Xi and I head to the Lan Kwai Fong area, which is famous for its laneways and streets full of bars.  We grab a pre-dinner drink at Dragon-I, which is located on the first floor of the building next to Centrum on Wyndham Road, and directly across the road from Hotel LKF, a fancy boutique hotel. It is, to my pleasant surprise, a cigar friendly restaurant. The sweet aroma of hand-rolled Cubans wafts through the air as we turned up. This places even turns into a cranking bar later at night that is a favoured haunt of visiting international models. 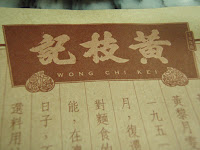 For dinner, we went to the renowned Wong Chi Kei restaurant. Funny name, seriously good food, at a seriously cheap price.  In the great tacky tradition of Chinese restaurants all over the world, they also had a portion of wall dedicated to photos of minor celebrities who had previously visited (in this instance, I only recognised the former British Governor of Hong Kong). I ordered a Loh Mee (thin egg noodles braised in soy sauce) with braised beef brisket and wontons.  I love the combination of the flavour and texture of Loh Mee, as well as the beef brisket, which was suitably tender and slightly gummy. The wontons were also good - firmly packed minced pork and prawn, which crunched when you bit into them.  Wu Xi, who was a bit crook from the Hong Kong winter, ordered a porridge with shredded chicken and slices of century egg. Which made me decide to get a side dish of century egg, or "pei dan" in the local lingo. Despite its moniker, it's not a hundred years old, but the faint of stomach will swear that it might as well be.  This delicately flavoured egg has been kept in mud for a number of weeks (although the urban myth is that it used to be ripened in horse piss). I for one am glad that this is no longer the prevailing technique. As you can see from the picture, the egg "white" is anything but, and instead approximates a slightly translucent, tasteless, black-grey jelly-like substance.  The yolk is also black, but is more pastey in look and in texture.  It's served with slices of pickled ginger, bits of shredded fresh ginger, and spring onion.  Utterly delicious. If you love it, thank you, and if you hate it, well, what Lady Sovereign said in Love Me or Hate Me.  The fried rice and side dish of fat, juicy mushrooms were also nice, but pale in comparison to the eggs. 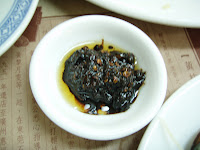 The chilli is an interesting study.  Unlike the reasonably spicy chilli oil that we're used to finding in many Perth Chinese restaurants (ground, dried, hot chilli in oil), this one was more savoury/salty than spicy.  This is probably due to the introduction of black beans (and maybe dried fish?) to the mixture.  Still tasty and interesting, but I'd prefer something spicier anyday.

The damage for this feast came up to a measly HK$200 (around AUD30) - the average price of a standard dish at this place ranges from HK$40-60 (or AUD6-9). The additional bonus is the fit-out of the place. It's modern looking (with faux antique Chinese furniture etc), and reverse cycle airconditioning for your culinary comfort! Great value indeed.
Posted by The Frenchman at 2:03 PM