The Frenchman in Namibia - Oryx, Kudu, Springbok ... more game meat than you can poke a stick at!

The great things about Namibia is that game meat is plentiful. Just driving in the countryside will guarantee sightings of plentiful springbok, oryx and kudu, with the odd donkey-drawn cart interspersed along the way.


My favourite has got to be the oryx. It is a magnificent animal to watch, but even better to eat. Tender and juicy, it gives steak a run for its money. Unfortunately, there isn't the same degree of differentiation given to the various cuts of meat that can be gotten, so it's sometimes a but of pot luck. If you're lucky enough to get a good fillet, it is truly sublime. You can order it in virtually any restaurant, and even find trays of freshly shot, locally sourced game in your local supermarket, so that you can enjoy your own game braai.  The oryx steaks pictured below (which we cooked up as a Christmas Eve dinner in the bush) were so fresh and so tender that you could use them in a steak tartare.  As a matter of fact, Brandon and I did just that.  We have photographic evidence, but I'll spare you the sight.

Namibia itself has lots going for it - apart from the plentiful mining opportunities, including the biggest uranium and flourspar mines in the world, it's a very clean place with good infrastructure and services, and the people are very friendly. But what is amazing about this place is the safari experience. Erindi Private Game Reserve is only a three hour drive out of town, and Etosha Game Reserve is a massive, publicly accessible park where the public can rent chalets. In both places, you can get a chalet that fronts onto a waterhole, and watch the wild animals frolic while having a drink. Apart from the various antelope species, there are lions, jackals catching a turtledove breakfast, herds of elephants, crocodiles, and kaleidoscope of giraffes! 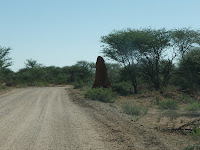 If you get sick of looking at animals, the views are always spectacular.  Speaking of which, here's a typical Dylanesque bush setting.

You don't even have to search for the rare and endangered African black rhinoceros, complete with baby rhino. Many South Africans have been known to go on frequent safaris for 20 years, and not even catch a sighting of this rare and wonderful beast.

It is a truly magical experience to watch a mother rhino with its baby just metres away, sipping Amarula on the rocks, while a midnight African thunderstorm pours down on you.

Posted by The Frenchman at 1:08 AM