Coffee ... enjoyed by billions around the world, adored by millions and abused by more (I'm not admitting to anything!!). 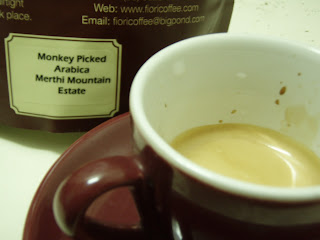 With this kind of following, purveyors of coffee have the luxury of offering weird and wonderful stuff.

I'm talking Monkey Picked Arabica beans from Merthi Mountain Estate, India, brought to us by Fiori Coffee.  Wild monkeys (as opposed to the trained ones who can supposedly type Shakespeare's collected works off the top of their collective heads, or the gambling ones who call Action Man's K-9 top pair with a 9-7 to hit the gut-shot straight on the river) abound in the forest bordering the coffee estate, and treat themselves to a snatched handful of coffee beans when the guards aren't looking.  I supposed it's kind of like olives for monkeys.

Fortunately (or not), these beans are not produced in the ablutionary manner of the Indonesian civet cat, but are instead very simply spat out onto the forest floor once the monkeys have chewed the flesh off the beans.  There they lay for a while, fermenting in monkey spit (one can only speculate) until an enterprising person from the coffee estate collects them so that they can be sold to unsuspecting coffee wankers for a massive mark-up.  Yours truly is living proof that someone will buy it!

Because it's been fermenting away, it's supposed to have a milder, delicate flavour, as compared to your standard arabica. When I tasted this during a special tasting with the Perth Food Festival late last year, it was a tasty cup, although the chap from Fiori was at pains to point out that this was simply a novelty one-off that they thought people might find interesting.

These beans appear darker than your garden variety beans.  The other thing is that some of the pits in the coffee beans are supposed to be caused by the monkey's teeth.  But when I compare it with "normal" beans, I struggle to pick the difference.

Hmmm ... a very subtle, light coffee-caramel aroma.  But what's this? There's an unexpected robustness in the flavour - bitter around the edges.  Slight citrus towards the bottom of the cup, but still bitter all the way through.  Perhaps I've pulled it for too long or used too much coffee? 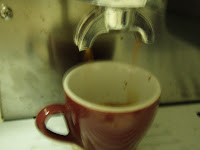 Not much change from yesterday's coffee.  Still tinged with bitterness, like a choking Collingwood Grand Final draw despite a strong first 2 quarters.

30 Sep 2010
Okay, this time I'm drinking coffee when I get home at night (never a good idea if you want a good night's sleep).

To be sure, I decide to make a control cup using the Tartine Five Senses house blend.  And this time, I pull for 25 seconds.  And despite my better judgment, I drink both cups, alternating sip-by-sip.

The monkey coffee has a richer-looking crema, and is a lot more approachable, but still very robust and I'm not picking much complexity.  The flavour picks up towards the end, but it's still not something to write home about.

On the other hand, the "normal" coffee tastes great, starting with nice toasty caramel, through to lemony citrus at the bottom. 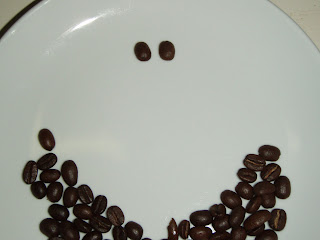 The verdict?  Monkey beans are an interesting experience, but it doesn't make a great cup of coffee (in fairness, I must say that Fiori do make good coffee beans).  Then again, it might be due to the fact that I'm no barista.
Posted by The Frenchman at 12:04 AM