After dinner, we adjourned to Geezer's apartment down the road (well it's really a penthouse), where he generously breaks out a special treat - the Monte Cristo Edmundo Dantes (named after the hero of Alexander Dumas's famous book, The Count of Monte Cristo), which is a regional edition made exclusively for Mexico.  Geezer picked it up in Hong Kong, where the owner of the cigar shop reckoned that this cigar was made specially for the Mexican President, and because they're good mates, he managed to wangle a hundred boxes.  Hmmm ... 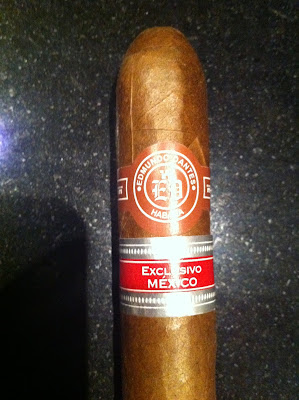 Leaving that aside, the Dantes is an impressive cigar.  It's a double robusto - big ring gauge and lots of smoking value.  I knew that they made the Edmundo in a bigger size, but this is a new level (sorry that was an in-joke).  And it was a very pleasant smoke indeed, washed down by some Glenmorangie 18yo,  It started off surprisingly mild for this line, when the garden variety Edmundo is quite a strong cigar indeed.  But nice and complex.  Smooth creamy smoke, with light coffee and cocoa flavours.  And a very easy draw (a tight draw is always a risk with longer cigars, and can leave you blue in the face from over-puffing) to boot.  The smoke was woody, cedary and very pleasant, as a good cigar should smell.

The I hit the last third of the cigar, and this beauty turned into a beast.  There was the Edmundo I knew - big and in your face, and threatening to blow your head off.  It was so nice that I didn't want to chuck it into the ashtray, then when I felt the beginnings of a tiny bead of sweat start to form on my left temple, I decided that discretion was the better part of valour.

What a pleasure to enjoy this cigar, which thankfully for me isn't quite that exclusive for the Mexican Prez. Thanks Geezer!
Posted by The Frenchman at 1:28 PM