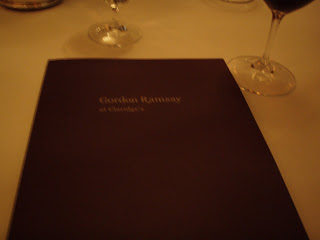 A delightful meal in one of London's grand old-school hotels, with a Michelin star to boot.  Lots of f#@$*ng soup in every dish, I must say (sorry I couldn't resist).

This was part of the 2007 International Festival of Melvo - my birthday dinner with good friends in London.

To celebrate the occasion (and the fact that the wowsers had passed a law to ban smoking indoors from 1 January 2008), I lit up a 1973 Romeo & Juliet Churchill in the cigar bar at Claridge's, the last one they had in stock. It was an exquisitely smooth, creamy smoke. The decades had seen all the ammonic harshness dissipate, and yet its flavour was complex, with subtle layer upon layer of nuts and spices.

A mix-up between the Veuve La Grande Dame (which was out of stock) and the La Grande Dame Rose meant that my mates Simo and Nathan ordered two 150 quid bottles (thinking they were only 70 or 80 pounds each). I think their respective missuses were very cross for a while ...

(Note: Gordon Ramsay at Claridge's lost its Michelin star in 2010)