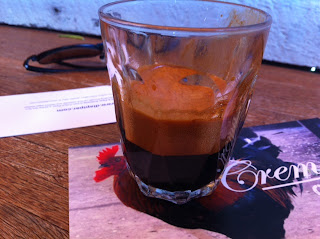 When I had to meet up with someone for a coffee in West Perth the other day, I immediately chose Pony Express, and was glad to have done so.

This time, the Slayer was operational, and I ordered a single origin espresso.  Their coffee roaster, Crema Gourmet Coffee Roasters, had left postcards on the tables expounding the virtues of this particular single origin from the family-owned Finca El Limonar estate in Guatemala's mountainous Huehuetenango region, which has been in operation since the middle of last century.

Check out the crema on this bad boy - occupying as much volume as the coffee itself, and every bit as delicious (or perhaps more so)!  Beautiful, rich, creamy, soft, fruity textures and flavours abound, with my favoured lemon-crisp citrusy finish at the end.

When I chatted to Emmanuele of Ristretto some time later about the monstrous head of crema I enjoyed, his view was that the volume of crema is a function of the freshness of the coffee beans, not the machine.  And he then proceeded to make me a cup of Guatemalan La Esperanza (this one was the 2012 Cup of Excellence #7), which he had freshly roasted himself the previous week at his Northbridge roastery (is that what it's called? I dunno - I just made it up).  And yes - massive head of crema all the way to the rim of the porcelain espresso cup, and tasting every bit as silky, fruity and citrusy as one would expect from a great coffee.  I even got hints of ginger with the first few sips!

That's what I love about coffee - you learn a new thing everytime you ask, and everyone has a different approach and philosophy, but all roads still lead to great coffee.
Posted by The Frenchman at 12:36 PM