I feel privileged to have been a tasting judge at the Chaîne des Rôtisseurs’ Western Australian Bailliage Jeunes Commis competition on Wednesday 16 April 2013, my second year to have undertaken this role.

5 brave and talented young chefs, some as young as 16 & 17, competed under great pressure in Crown Perth’s commercial kitchen to design, cook and plate up a 3 course meal for 4 people within 3 hours, to be served in one of the Crown’s ballrooms.  This was not a case of all comers being allowed to compete.  Rather, care and consideration went into selecting the competitors to ensure that the limited spots in this event went to worthy challengers:

This year, we had 4 kitchen judges and 8 tasting judges, with the tasting judges staying out of the kitchen and carrying out a blind tasting of numbered plates so as not to have their judgment affected by what went on in the kitchen.  All of the judges were hospitality professionals, except for WA Bailli Regional Wayne Teo and myself, who were tasting judges.  The judges were: 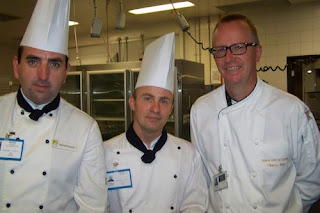 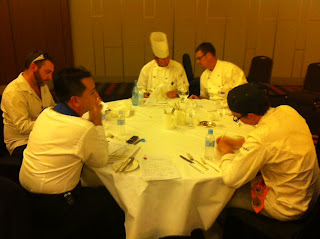 The black box of ingredients was unveiled first thing that morning, and included some challenging compulsory ingredients: lamb shoulder on the bone, mussels, eggplant, dried apricots and bananas.  Competitors were also given a wide range of optional ingredients to choose from – the snapper was a popular choice.

The winner of the WA Jeunes Commis is Michael Hull of Crown Perth, who led by a clear and convincing margin in the eyes of both the kitchen judges and tasting judges.  His entrée of perfectly cooked snapper and mussels with a perfectly crisp slice of prosciutto and main course of deliciously tender lamb shoulder on a bed of apricot rice and eggplant mousse were easily the best executed and tasting dishes; his dessert of panacotta with lime zest drew rave reviews from some tasting judges for the remarkably striking and lively flavour of the accompanying lime jelly which perfectly complemented the pannacotta, itself displaying a perfect balance of creaminess, texture and firmness.

Michael will now undergo intensive mentoring and grooming in preparation for the Australian national Jeunes Commis competition that will take place on the Gold Coast on 8 June 2018, utilising funds and resources that the WA Bailliage has set aside to be spent on the development of young talent in the hospitality industry.  This includes dining out at some of Perth’s best restaurants to better understand the front of house experience.

National Conseiller Culinaire and WA Vice-Conseiller Culinaire Phil Westwood, remarked that everyone was a winner – all competitors received a certificate of commendation, a Chaîne apron and pin and a cooking book or recipe diary.  Michael’s prize also included the State winner’s medal, a cheque for $300 and a magnificent Heston Blumenthal cookbook. 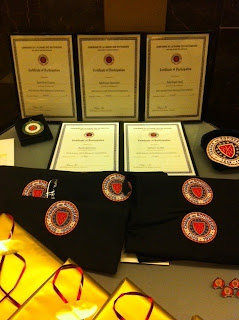 All competitors received valuable advice from the judges, which included last year’s Australian Jeunes Commis winner and Chef Rôtisseur Travis Simmonds – among Travis’s pearls of wisdom was the need to integrate the compulsory ingredients into the dish, rather than just sprinkling them on as a garnish or an afterthought.  Chef Westwood also commented that all of the competitors performed with remarkable composure, and that he had seen more experienced young chefs crack under the pressure they experienced that day.

Competitors were also encouraged to compete again next year, armed with the new knowledge, experience and advice gained from their participation this year.

The WA Bailliage wishes to express its gratitude to Crown Perth for generously providing its world-class commercial kitchen and cooking supplies for the competition, and especially to Maître Rôtisseur Chef Sean Marco for his staunch support on this and other Chaîne events and endeavours. 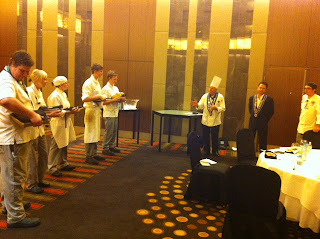 Vive la Chaîne!
Posted by The Frenchman at 12:31 PM