On 20 February 2012, thanks to my good friend Simon Devlin (purveyor of fine cigars, gentlemanly accoutrements and of course Riedel glasses and decanters), I had the privilege of attending an industry-only red wine masterclass conducted by Georg J. Riedel himself, the Austrian owner and head of the Riedel glassware empire.  Attendees comprised sommeliers, restaurateurs, wine merchants and retailers.  And me …

The masterclass focused on the 3 main red wine varietals: pinot noir, shiraz and cabernet sauvignon.  I sat down to an array of 3 Riedel glasses, 3 plastic cups (each full of one of the red wine varietals), a bottle of water, and a Lindt Lindor chocolate ball.  Most interesting indeed.
Georg insisted that he was not a wine expert, and instead described himself as being in the business of “delivering wine”, with the glass being the tool by which he delivers the wine directly into our mouths.  In this regard, it isn’t a black art – science is paramount – everything from the size of the aromatic molecules (what’s the difference between the smell of chicken shit and the aroma of rose petals? The size of the molecules!) to the balance of sweetness and acidity of a given wine varietal.
Georg also provided contextual information as the masterclass continued:
Water-tasting: a warm up for the palate
He then provided some sensory context with a water tasting from the 3 different wine glasses before us as a warm up for the palate.  Because water is tasteless and odourless, our sense of touch is heightened, so we feel the contact with the cool water more keenly and understand how gravity takes it around the inside of the mouth and around the tongue and palate.
The flow of water into the mouth is of course an indication of what the glass does when it actually delivers wine:
I don’t know about you, but I’ve never been patient or curious enough to do this at home, even though I’ve got a selection of Riedel glasses sitting around in my kitchen cabinet.  But I would thoroughly recommend it for the illumination it provided.
It was interesting to note that the majority of attendees, including me, preferred the cabernet sauvignon glass when drinking water.  It’s strange isn’t it, since water is water, regardless of what glass you drink it from?  Well, this was only the beginning of the journey. 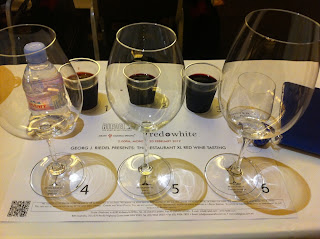 Tasting the wines
After all this preparation, we finally got down to tasting the wines.  Georg got us sipping the lightly chilled wines directly from the plastic cups – even from a plastic cup, you could tell that these were quality, well-made wines.
He then declared that if a restaurant attempted to serve him wine in the wrong glass, he would rather drink it from a plastic cup instead, because the cup would have a neutral impact on the aroma and delivery of the wine, whereas the wrong choice of glass will have a dramatically negative impact.  I was slightly bemused at this stage – how could this be, since the wine is the same wine regardless of which glass you drink it from?  Well, my eyes were about to be opened as it was now time to start drinking from the glasses.  Georg proferred the following advice: just let gravity take the wine naturally around your mouth and follow the sensations and flavours as they develop.
My more detailed tasting notes are found below in the appendix, if that is something which interests you.  Otherwise, here’s the summary:
Pinot Noir: This Mornington Peninsula pinot noir, whose winemaker is also a Master of Wine, was sublime when “delivered” from the pinot noir glass.  But not so from the other glass – particularly from the cabernet sauvignon glasses, where the primary aromas are undetectable and the taste is completely dominated by sour acidity.
Shiraz: The Barossa Valley shiraz on the other hand clearly shone through when drunk from the shiraz glass – perfectly balanced and delicious.  The pinot noir glass merely seems to mute the aromas and flavours, although it accentuates the sweet fruits over the acidity – if you like your wines sweet, that’s fine, but it was overbalanced in favour of sweetness.  On the other hand, the cabernet sauvignon glass almost made this great shiraz difficult to enjoy, delivering a one-dimensional, lemony flavour of acidity.
Cabernet Sauvignon: The Margaret River cabernet sauvignon was amazingly complex, balanced and delicious when imbibed from the cabernet sauvignon glass – a gradual symphonic evolution of flavours and sensations balanced by fresh, crisp acidity.  But when taken from the pinot noir glass, it was hard to pick the aroma at all, and the flavour was over-dominated by acidity all the way through.  The shiraz glass on the other hand appeared to strike a compromise between the other two glasses.
This led to a few revelations:
Decanting
Georg then asked the question: why do we decant wines?  Well, I have heard many debates over the two schools of thought, but Georg argued that both are valid for different reasons:
Wine and food